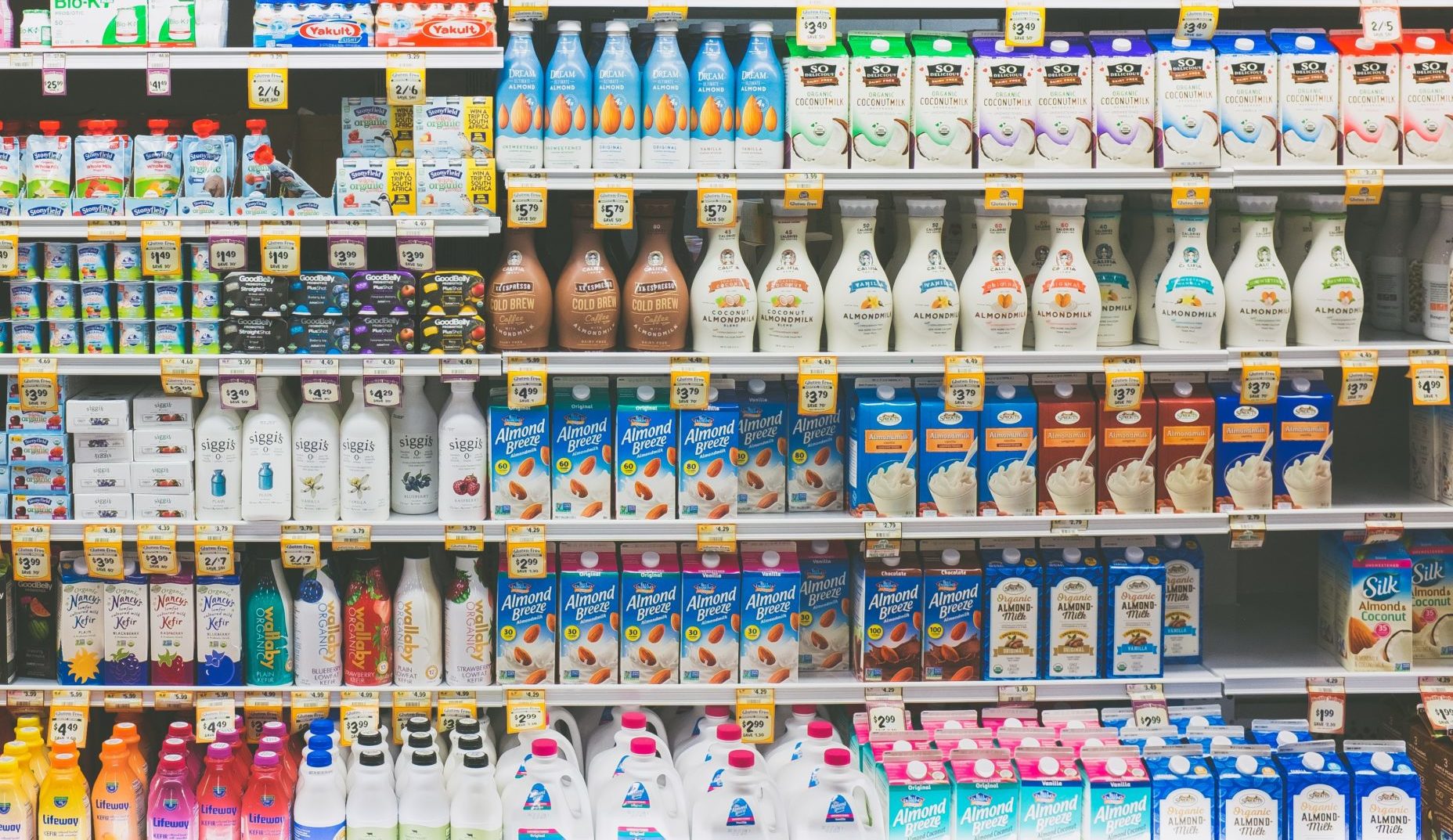 What type of milk should children drink?

Many parents feel confused about which, if any, type of milk they should give their child. Is cow’s milk still a safe option? Is there a milk alternative that’s better? Oat, almond, soy, hemp and coconut milk are just some of the milk options in the ever-evolving world of dairy alternatives.

While there are many ways to add calcium-rich foods into a child’s diet, a milk-type drink is a common choice. But which one is the right one for your child?

We break down the pros and cons of each type of milk and the two BIG don’ts, when it comes to topping up your littles’ diet with a nutritious fluid:

Why are there such strict guidelines around young children and milk? Babies and young children need a specific balance of healthy fat, calcium and protein to grow and develop properly. Drinking the wrong kind of milk at an early age can fill your baby’s belly up, leaving very little room for the nutrients they need.

Many people consume dairy products from cows, goats or sheep. Lactose is a disaccharide sugar naturally found in animal milks that many people have trouble digesting. If you regularly consume milk or other dairy products in small amounts, your liver will produce and store lactase, the enzyme you need to digest cow’s milk products. Some people don’t produce this enzyme or they stop producing it, resulting in lactose intolerance. Lactose intolerance causes gas, discomfort and digestive issues.

Some babies are sensitive or even allergic to cow’s milk protein and this becomes very clear, very quickly after their first experience with dairy. Many children outgrow this allergy over time, but it can make finding the right milk for your little one difficult.

Two tricks you can use to alleviate lactose intolerance:

The most common of all milks, cow’s milk has been consumed in many cultures for thousands of years. It’s a whole food, is naturally nutritious and provides an excellent source of calcium as one cup gives you about 300 mg, which is almost 50% of your child’s daily calcium needs. It also provides some Vitamin D. On average, protein in cow’s milk hovers at 8 grams per cup and it’s a great source of healthy trans fats for the brain and heart.

Goat’s milk has become a popular first milk for babies in the past five years. It’s an animal-sourced dairy product that is often found in smaller grocery stores, specialty stores, health foods stores and farmer’s markets. As a whole food, it is largely unprocessed, with naturally-occurring nutritional benefits.

There is a lot to like about goat’s milk. It is fortified like other milks to contain vitamin D and is an excellent source of vitamin A. It’s also a good source of calcium, zinc, selenium, iron and healthy trans fats such as vaccenic acid many other naturally occurring nutrients. Its important buy enriched goat’s milk, to get that extra calcium and folate (3 mg in non-enriched goat’s milk versus 13 mg in cow’s milk). It also contains about 9g of protein per cup. Some babies may even find goat’s milk a little easier to digest than cow’s milk, due to different and smaller protein particles. It is also lower in lactose than cow’s milk.

Most dairy alternatives are fortified and have few naturally-occurring nutrients. They can, however, be fortified to be just like dairy products in terms of the calcium and vitamins they provide. The protein content alternative milks varies significantly, depending on the base grain or bean used.

One major caveat is that to create a smooth beverage, most plant-based milks contain fillers and binders; some common names for these are carrageenan, xanthan gum, locust bean gum, guar gum and gellan gum. These come from a variety of sources including legumes, seaweed and bacteria. Recent studies have shown that these can disrupt the production of healthy gasses our gut bacteria naturally produce, and may change those bacteria over time to be less healthy.

This could potentially be irritating to a young child’s digestive system, especially those with sensitive bellies, and the long-term effects of changing your child’s bacterial balance in the gut are unknown. While more research is needed, the best strategy is to keep the amount of fillers and binders in your child’s food as low as possible (e.g. 1 cup of almond milk vs. 3 per day).

You can make nut/grain or bean milks at home but they will not contain the proper fortification to make them nutrient-dense enough for children.

Although soy has been a controversial ingredient, current scientific data suggests that there is no clear evidence of risk, and soy-based formulas are considered safe for those infants who require them.

Soy milk is a common alternative to animal milk, especially for babies and kids who are allergic to dairy-based infant formula.  This is an ancient food in many Asian cultures and has been popular in Canada for several decades. It is made from filtered water and processed soy beans that are made into a mash and are fortified with a calcium. Soy is a source of healthy polyunsaturated fats, and each cup contains about 8 grams of protein and 319 mg of calcium, making it closer in nutrition to animal milks than the other plant-based versions.

Almond milk is a very popular alternative to cow’s milk these days. Not all almond milks are fortified to the same level of calcium as animal milk and soy milk, so if you are using it to get calcium into baby, make sure you read the label. Look for 30% Daily Value of calcium per cup. Typically, almond milk is low in protein, offering only 1 gram per cup. It can be an alternative to milk for children two years and up, if you can find one with good calcium fortification.

Rice milk is made by cooking and mashing rice with water, straining and filtering to achieve a fluid drink. Any calcium has been added, but can be enough to meet your child’s daily needs. Like other plant-based beverages, rice milk is low in protein, with less than 0.5 grams per cup, and may contain excess fillers and binders which don’t benefit baby.

Hemp milk is made from hemp seeds. It has a more tangy, nutty and gritty taste than many of the other plant-based milks. It is six times higher in plant omega-3 fatty acids than cow’s milk. These are great for growing and developing hearts and minds.

Coconut milk could refer to two different products: actual 90% coconut milk found in cans, or newer types of beverages that are like almond and soy milk, made with filtered water and varying amounts of coconut cream. It is usually fortified with calcium and vitamin D, but not always to the same level as animal milks, so you need to read the label to be sure. Coconut milk is low in carbs, calories, and cholesterol, but it contains virtually no vitamins and minerals. It is a good source of polyunsaturated and saturated fats, but contains little protein. It has an interesting flavour compared to the other milks and adds a more tropical flavour to your coffee!

This is the latest trend in plant-based milks and is another popular homemade option as well. Oats themselves are good for cholesterol, blood sugar management and improved digestion, but there are no studies yet to show that oat milk carries the same benefits, unfortunately. Oat milk is also popular because it has a creamier texture than some of the other plant-based options. Most commercial oat milks are fortified to include calcium and Vitamin D, and it naturally contains about two to four grams of fibre per cup, but be wary that homemade versions will not have these benefits. The makers of oat milk also suggest that it is the best option environmentally, as producing oats uses less water than growing almonds or keeping livestock.

Nutrition is as individual as a finger print, so one family’s choice may be completely different than yours. The most important thing is that you are making an informed choice for your kids.

This website uses cookies to improve your experience while you navigate through the website. Out of these, the cookies that are categorized as necessary are stored on your browser as they are essential for the working of basic functionalities of the website. We also use third-party cookies that help us analyze and understand how you use this website. These cookies will be stored in your browser only with your consent. You also have the option to opt-out of these cookies. But opting out of some of these cookies may affect your browsing experience.
Necessary Always Enabled

Performance cookies are used to understand and analyze the key performance indexes of the website which helps in delivering a better user experience for the visitors.

Analytical cookies are used to understand how visitors interact with the website. These cookies help provide information on metrics the number of visitors, bounce rate, traffic source, etc.

Advertisement cookies are used to provide visitors with relevant ads and marketing campaigns. These cookies track visitors across websites and collect information to provide customized ads.

Other uncategorized cookies are those that are being analyzed and have not been classified into a category as yet.

Thanks for visiting Vibrant Nutrition!

Have you heard about our new "Starting Solids" video course? Get the first 2 parts FREE by registering today.